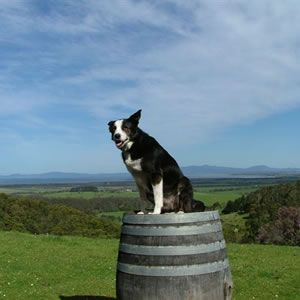 I might be a silly dog sometimes, but even I am not so silly to think that wine barrels are just made for us vineyard dogs to sit on and look pretty. (Pictured above is Kelly from Windy Ridge Winery in Victoria, Australia)  I’ve heard plenty of folks asking about the barrel terminology used in the tasting room. It is likely that these are questions that have been asked for years upon years since oak barrels have been the primary storage vessel for wine since the Roman empire was in the conquest phase.

Romans didn’t always use oak barrels for storing and transporting their wine.  The first preferred container was the clay amphora and this was used for many years since it was easy to carry, could be decorated, and most importantly sealed out the air that can ruin wines.  Easy transportation was especially important for the Roman troops as they helped the empire spread. Wine was an ideal beverage to take because it was often safer than water, it provided calories, and it gave them a buzz as they headed into battle.  As the empire spread, the clay pots became too heavy to lug on their increasingly long journeys.

This was the perfect time for the Romans to encounter the Gaul.  The Gaul were using technology learned from the Celtic region to create oak barrels for storing beer.  Roman soldiers immediately saw the benefits for storing wine in oak barrels: the wood was soft and easy to bend, oak was plentiful in Europe, and the barrels were waterproof due to the tight grain of the wood.  Folks in charge of carrying the wine also quickly discovered a huge bonus: oak barrels could be turned on their sides and rolled. This was a match made in heaven!

After actually storing wine in the barrels, the Romans realized that not only was the barrel useful and mobile, but it imparted a delicious influence on the wine both in texture and flavor.  Since then, the art of using barrels for wine aging has morphed into a science of using a variety of oaks, toasted or not, new or neutral to create the desired effect.

There is so much to tell you about the difference between American, French, and Hungarian oaks that I can’t fit it into one blog.  Stay tuned for more information about oak barrels coming in the next blog, but for now I will answer the question nearly EVERYONE asks: “What country does neutral oak come from?”  Oaks of American, French, or Hungarian origin can all be considered neutral. A barrel is considered neutral after it has been used for two or more vintages. The rule of thumb I have heard is the first aging it is called new, the second has no specific title (i.e. simply French oak or American oak), and anything after that is considered neutral.

French, European, and American – What Does It All Mean?
Scroll to top
Review Us!