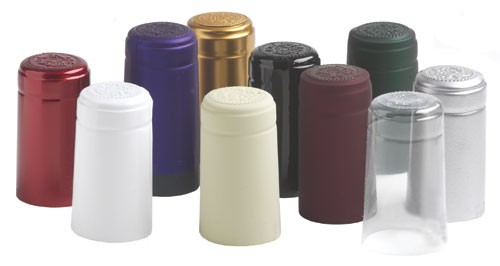 Since I already told you about the bottles and corks that we use here at Brix & Columns, I figured the natural progression was to talk about the capsules on the tops of the bottles.  That’s right folks, those pesky wrappings that you have to cut into on each bottle have a technical name: capsules.  Even though they are solely for decorative purposes now, wine capsules were originally used to protect the wine cork from varmint like rats and cork weevils.

Even though they aren’t necessary, these cork coverings can carry a few secrets of the wine’s origin.  Some foils cover a strip of paper that is wrapped across the top of the bottle.  This strip is the wine bottle’s seal of authenticity, and the bottle can’t be opened without compromising the paper.  It is thought that these seals prevent thieves from stealing the good stuff and replacing it with subpar wine.   Bottles of Rioja are generally covered with gold netting on top of, or even instead of, the standard foil.  This also originated as a security device, as one Rioja winemaker made the favored wine of King Alfonso XII.  The once dense gold netting was impossible to cut through and, thus, lesser wine could not be passed off in previously opened bottles by ne’er do wells.  Today the gold netting is still present on most Rioja wines, but in a much more delicate state.

In olden days (and right up to nearly modern times), one of the oldest worked metals, and one of the most malleable, was used to make capsules: lead.  Eventually, the connection between use of lead and lead poisoning was linked and the use of lead stopped in many capacities – including in the production of wine capsules.  Since then, the materials used are primarily tin, aluminum, and PVC.  All materials serve the same purpose and the material used is determined by the quality of the wine.  Tin is typically used on the highest quality wines. It is one piece, seamless, and easily conforms to the shape of the bottle.  Next down the line is aluminum.  This capsule is falling out of favor since removing it can be difficult and often results in sharp edges.  PVC capsules are the most cost-effective to use and have the benefit of being able to be produced in any number of colors and prints. All of the capsules are applied to the bottle by slipping the capsule sleeve on top of the bottle and rolling it into the proper shape through the use of spinner machines.

The only exception to this process are the wax dipped bottles like our Six-Penny Post Script. Unlike most capsules that can be opened by cutting around the top of the bottle, the wax covered bottle is opened by inserting the corkscrew directly through the wax and proceeding to open the bottle.  Make sure you dust off any wax remnants before you pull the cork!

One thing is for sure, we are so used to seeing wine bottles with capsules, that it is hard to imagine them without.