Practically everyone has been to a wedding where the charming little ring bearer or flower girl steals the
show as he or she walks down the aisle in their adorable outfit. What many of us do not know, is how
these traditions began. While there are many different explanations, each having its roots in various
cultures, the origins are hard to pin down.

Some date the tradition of ring bearers back to ancient Egypt, when jewels were often carried on
ornamental pillows during various celebrations including weddings. In medieval times, rings were often
presented to the bride and groom on the tips of swords. These swords were likely carried by adults
while a page boy would carry the bride’s train and a prayer book. It is thought that wealthier families
replaced the swords with pillows (a rarity in that day) to display their wealth, and thus transferred the
duty of carrying the rings to the page boy. The ring bearer having a role in traditional weddings, grew in
popularity during the Victorian era. The outfit for ring bearers, back then, was typically velvet jackets,
kinckerbockers, and big collars. Today’s ring bearers tend to wear a boy’s tuxedo that matches the other
groomsmen, while some bridal parties get creative with these little guys whether it be a theme or full
out costume. 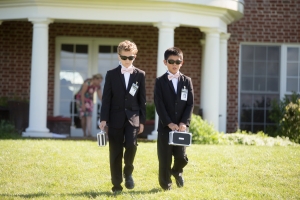 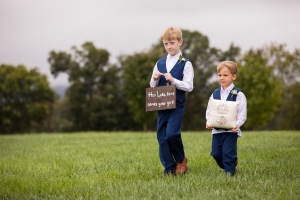 The tradition of flower girls seems to date back to the upper-class Greeks and Romans. In those days
flower girls would walk ahead of the bride, showering her path with grains and herbs, which
represented the hope that the bride could have children. The interpretation of this tradition got a little
looser around the Elizabethan era. During this time, the inclusion of children in the wedding party itself
was more a reflection of how that culture idealized childhood, seeing them as symbols of hope and
innocence. Since the flower girl walks down the aisle before the bride, she was seen as representing a
younger, more innocent version of the bride and her transformation from child to adult. Today, most
couples, include a flower girl in the wedding party to honor a little one who is a family member or close
to the family. She is usually outfitted to match the bridesmaids or complement the bride. And, while
most carry a bouquet or basked of flowers we see some who carry pretty lanterns, flags or scrolls with
messages like ‘here comes the bride!’ 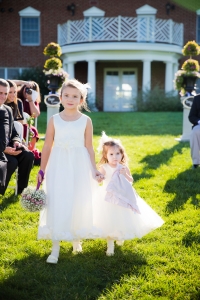 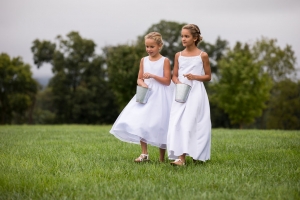 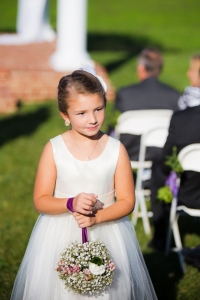 While researching the tradition of ring bearers and flower girls reveals some interesting information,
their main duty today is to set a cute tone and leave guests smiling from ear to ear.

Circle of Love
Scroll to top
Review Us!