The wedding cake, wreathed in hand-crafted sugar roses and fresh florals, is sometimes as much of a symbol of the marriage ceremony as the bride’s dress.  Modern cake designs range from subtle (icing patterns that mirror the embroidery on the bride’s dress) to outrageous (cakes resembling activities, things, or places the happy couple shares).  There are also weddings where multiple confectionery treats like cupcakes, donuts, ice cream sandwiches, and candies are available for guests and a smaller tiered cake is reserved for the bride and groom’s cake-cutting ceremony.  Some wedding cakes can even be as tall as the bride!  Whatever the design choices, there is one thing in common: the cake is deliciously sweet. Despite this sugary presence, the wedding cake has a very different – but decidedly sweet – origin. 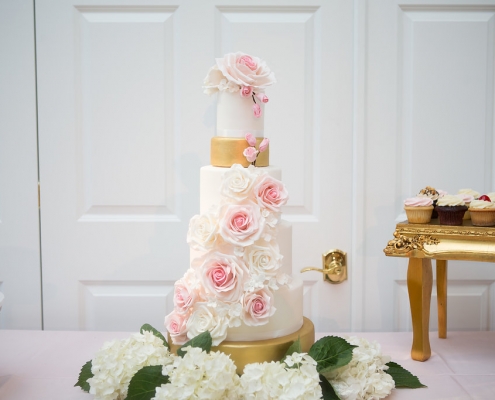 Wedding cakes have their roots in ancient Rome, where marriages were sealed when the groom smashed a barley cake over the bride’s head for luck and fertility.  The new husband and wife would nibble on a few crumbs together as one of their first unified acts as a married couple.  By the medieval days, the English stopped with the plain ole barley cake and started stacking spiced buns, scones, and cookies as high as possible – a precursor to the tiered cakes of today – and the bride and groom would try to kiss over it.  Legend has it that if they smooched successfully without the whole thing toppling over, they’d have a prosperous future.

The first known official wedding confection comes from a 1685 recipe for Bride’s Pye: a pastry crust filled with an assortment of oysters, sweetbreads, and other food oddities along with plenty of spices to mask the not-so-appetizing flavors.

By the late 17th century, wedding cakes started replacing bridal pies.  Since most homes didn’t have an oven, bakers would bake two pastry crusts on the hearth, then put currants between them like a sandwich, and sprinkle sugar on top.  Some couples waited until reaching their new home to dig into these wedding cakes.  The bride would take a bite, then toss the rest over her head like the bouquet toss today, so she and her new husband would get everything they want out of life.

When refined sugar started becoming more common (and cheaper!) in England, a bright white icing became the topping of choice for wedding cakes. The more refined the sugar, the whiter it was.  In those days, white was considered a status symbol and display of wealth. 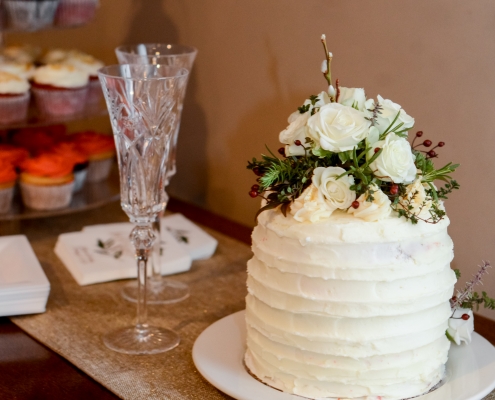 Smaller and personal, with multiple confectionery treats for guests.

Supposedly, tiered cakes got their official start in the late 18th century, when the apprentice of a London baker fell in love with his boss’s daughter. He wanted to create an elaborate cake to impress her when he proposed.  Formal wedding cakes became bigger and more elaborate through the Victorian age.  In 1947, when Queen Elizabeth II (then Princess Elizabeth) married Prince Philip, the cake weighed 500 pounds.  Princess Diana’s cake was 5 feet tall and adorned with marzipan Windsor coats of arms.  It was so vital to the royal union that two cakes were made, the extra serving as a stunt double in case of an accident.  There are all kinds of fun, historical, and outlandish wedding cakes to research for inspiration.

Even though it’s just dessert and disappears with the guests, your wedding cake will most certainly be a highlight for those with a sweet tooth and a memorable part of your special day.

Something old, something new

Vine Balance: A Competition in the Vineyard
Scroll to top
Review Us!