Brix Blogs
You are here: Home1 / Brix Blogs2 / Wine with Winston3 / Hallielujah! We Have a Sparkling!

Almost all of you know my big brother Winston, but not all of you know that I have another older brother and a few older sisters scattered around the United States (and world!). I don’t get to see them very often, but when I do, I cover them with hugs and kisses and beg them to play chase – which is my favorite game of all time! Well, this past weekend, Mom and Dad were really excited to go visit my sister Hallie. They said she had an important job to do – which was news to me  because I thought Winston and I pulled all the weight around here.

It turns out that Mom and Dad named their newest wine after Hallie, and they needed her to say that it was delicious enough to release to the public. Hallie’s wine is called Hallielujah, and it is perfect for any celebration – just like her! The flavors are zingy and bright, and the bubbles are a delight to anyone who indulges in a glass of our Sparkling White and Sparkling Rosé wines.

Sparkling wines might be new to our line up, but they aren’t new to the wine world. These bubbly wines were first noticed in the 1500s, but came about in a very accidental way. Wine makers were storing their wines in areas that had less than ideal conditions, and the warmer temperatures were causing the bottled wines to undergo secondary fermentations.

Everyone loved this new variety of wine to drink, so the winemakers decided to figure out a method to create sparkling wine on purpose. Over time, their trial and error processes became established practices, and now we have several processes in use today to create the sparkling wines that are so popular.

The most well-known method is the traditional method that takes the grapes through their first fermentation to create a base wine. This wine is then bottled with an addition of yeast and sugar.  After aging anywhere from 9 months to 5 years, the bottle is rotated to force the dead yeast cells to the top of the bottle. The yeast plug is removed, another shot of sugar is added to the bottle, and the cork is inserted.

Another method, used mainly for Prosecco and Lambrusco, is the tank method. In this method, the base wine goes through its second fermentation in a pressurized tank to achieve the desired amount of bubbles (called atmospheres in the wine world). After the process has finished, the wine is bottled and dosed with sugar. A benefit of this shortened process is that wine tastes a little younger in bottle and brighter in flavor.

A third method that is revered in the wine world is the Ancestral method (lovingly referred to as Pet-Nat). In this method, the base wine does not complete its full fermentation process before it is bottled. Instead, the fermentation is halted so the wine can be bottled; fermentation finishes in the bottle. Eventually the bottle will be disgorged (when the yeast plug is removed), but no sugar will be added. This method gets as close to the original sparkling wines as winemakers are able.

Another common method of creating sparkling wines is to simply add carbonation to the wine. This is the simplest method, and is often employed in the newer sparkling wines hitting the markets.

Regardless of the method used, you can be sure the product is delightful and ready to be enjoyed with your family and friends – even if it isn’t a special occasion!

What Winston and I want to know is when our wine is being released?  Of course it will be delicious, approachable, and sweet – just like us – but what would we call it? Until that day comes, Hallielujah will have to top your list of must drink wines at Brix & Columns Vineyards. 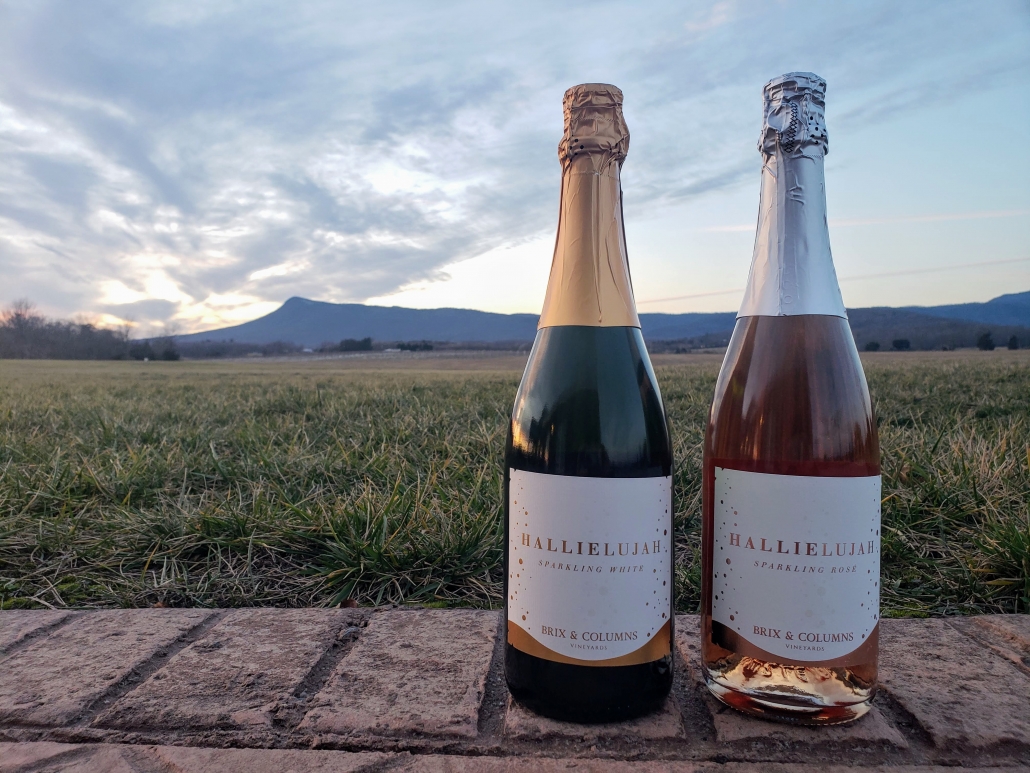 Structure: Not Just for Buildings!

Another Dynamic Duo: Wine & Chocolate
Scroll to top
Review Us!