When we imagine a wedding, we picture a day of celebration of two people meeting their soulmate and choosing a lifetime of happiness together.  We see the bride walking down the aisle, in her beautiful gown, to meet her groom patiently waiting for her at the altar.   Even though the main focus of this vision is on the bride’s dress, the groom’s attire is an important part of the wedding day fashion portfolio.

While wedding outfits for both grooms and brides have an interesting history, we’re focusing on grooms in this blog.  According to several sources, way back in the mid 1600’s men’s wedding attire was breeches and frock coats. That trend made its way out, and in the late 1700’s grooms were dressed just as extravagantly as brides.  Grooms from wealthier families would wear silks, velvet, pearls, furs, silver, gold, and even precious gems during this fashion period.  Their clothing was a lavish exhibition of their wealth.  Not everyone could afford to dress like this, so those who couldn’t dressed much more modestly, just wearing their best everyday clothes. 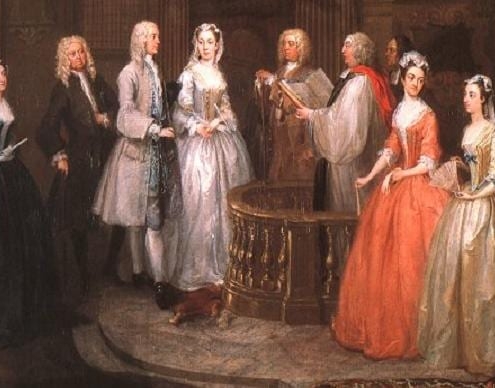 The wedding of Prince Albert to Queen Victoria, in the 1800’s, brought a significant change. The prince chose to wear his Field Marshall’s uniform which continues as tradition today for royal weddings. Prince Albert also wore a morning suit, that day, which takes inspiration for its cut and tails from the Field Marshall uniform.  From that moment on, there was a change from flashy ostentation to the clean lines and precision that Albert demonstrated on his wedding day. 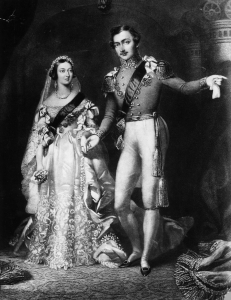 The morning suit became the traditional menswear attire for weddings during this time.  It provided an alternative to the decadent apparel of previous generations.  This was also a time when weddings primarily took place in the morning, so the groom and his groomsmen naturally wore their morning wear.  The formal evening tailcoat was only worn for other special occasions and formal events held in the evening.

Fast forward to the twentieth century where a variety of styles became mainstream.  The Stresemann style suit was created in the 1920’s and quickly became a popular choice for grooms.  It was around the 1930’s that the tuxedo came onto the scene.  This British creation quickly grew in popularity and became the picture of presentability. 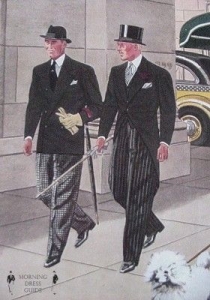 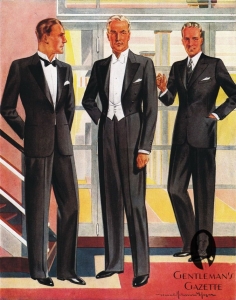 From there, different shapes, cuts, and colors became fashionable: wide-peaked lapels in the 1940’s, bell-bottom trousers in the 1960’s, and the double-breasted suit in the 1980’s.

Today, while the options are endless, we have seen a trend towards the classic tuxedo in colors that complement the bridesmaids and wedding theme.

The Tall and Short of it