Weddings are absolutely beautiful days that represent the union of two people and two families.  Couples often put years of thought into the special touches that they want present on their special day, and they often call on age-old traditions to incorporate into their wedding ceremony. The wonderful thing is that almost all of the traditions have a fun backstory that makes them even more special to use! 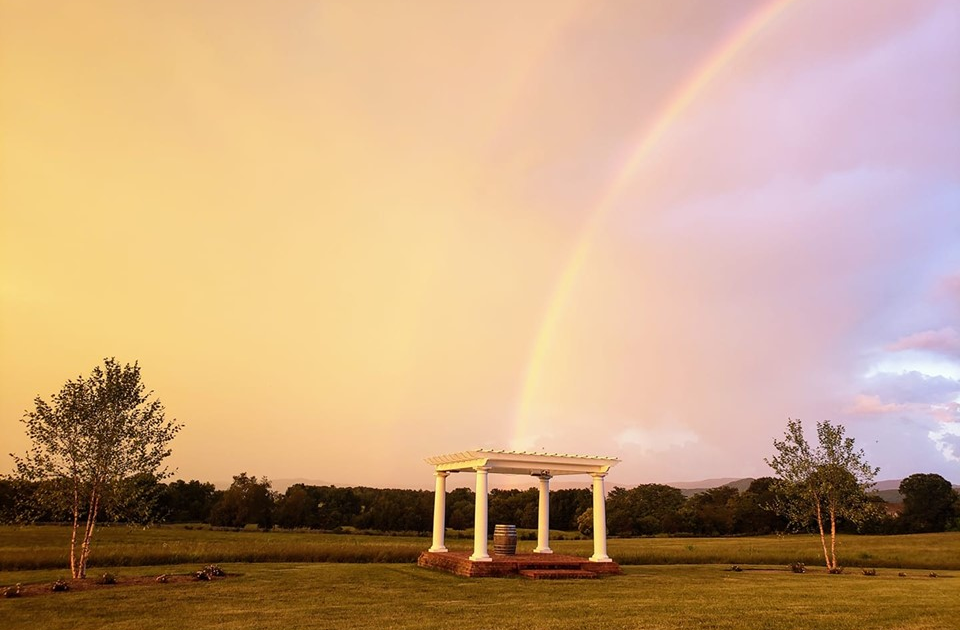 Asking for the Daughter’s Hand

One of Stephanie’s favorite stories from the construction of the venue took place during the laying of the foundation for the pergola.  She was washing dishes at the sink and looked out to see a young man approach one of the masonry men. After she saw that the two men were finished talking, Stephanie went out to see if everything was okay.  It turns out, the younger man was there to ask permission of his future bride’s father. The father did give his permission that day, and the couple was married on the same pergola that next year.

This tradition dates back to the days when bride families were paid dowries and continued when couples began to be allowed to choose their own life partners without their parents guidance. Now more of a formality, this practice shows respect for the life changing move the bride and groom is about to make.

This tradition is a southern one that helps to ward off bad weather on the wedding day.  Since weddings are held outside at much higher rates than northern weddings, they are also much more likely to be the victim of any of Mother Nature’s bursts of rain or cold.  In order to prevent anything other than a beautiful sunny day, tradition says to bury a bottle of bourbon near the ceremony site exactly one month before the couple weds. The type of bourbon doesn’t matter, but the bottle must be buried upside down and be completely full.

Dad Walking the Bride Down the Aisle

While some margin of this tradition dates back to the idea that a bride is the possession of one family that transfers to another on her wedding day, a more modern take on this special moment is that the father is walking with his daughter one last time before he lets her go into the world of being a full-fledged adult.

Being Married on the Half Hour

This simple tradition calls for the couple to be wed at a time when the hand on the clock is moving upward towards heaven.  The upward movement symbolizes that there will be many blessings brought forth for the newly wedded couple. 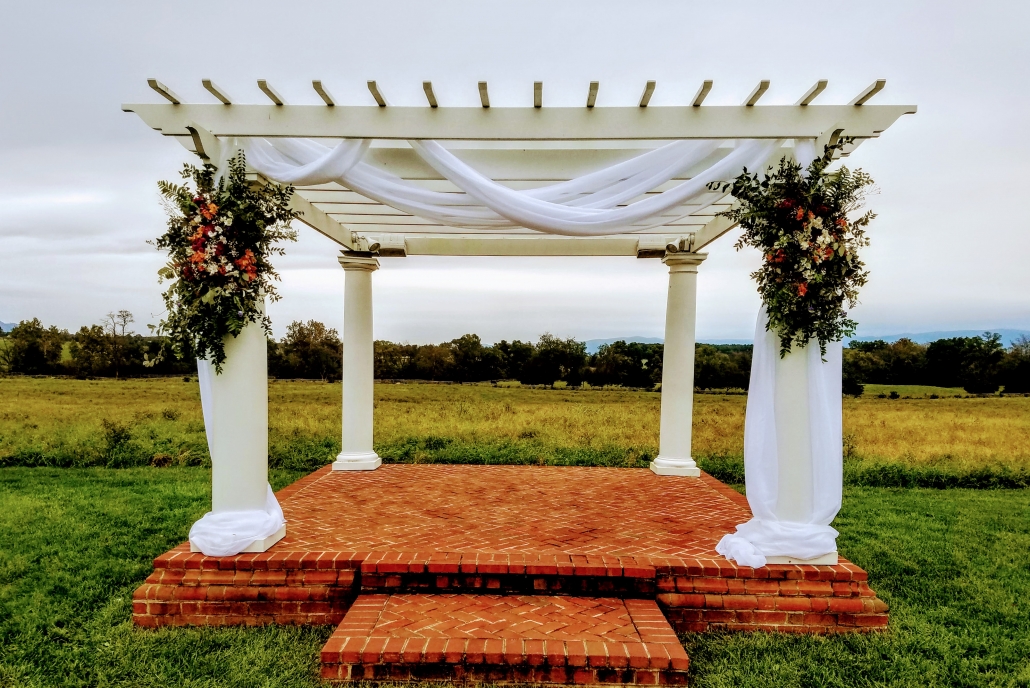 Being Married Under a Chuppah

This Jewish tradition calls for the couple to be married under a four cornered piece of fabric.  The fabric represents the new house they are forming AND calls for the public acknowledgement of them as a new couple.  It is a bonus if the couple can be married outdoors under the chuppah because the stars in the sky will help them to multiply, and they will have many children.  When a couple followed this tradition at our venue, they used a tallit, or prayer shawl, from one of their grandparents and secured it to the pergola.

This tradition came around to relieve the bride of some of the stress she was under on her special day.  In the olden days, folks who attended weddings believed that touching the bride, or even grabbing a piece of her dress, would give them the good fortune of getting married soon as well.  As a result, brides would often leave their wedding in shambles with their dresses ripped to shreds. Enter the bouquet toss. Tossing the bouquet allows wedding guests a chance to grab their own good luck while allowing the bride a much needed escape route. 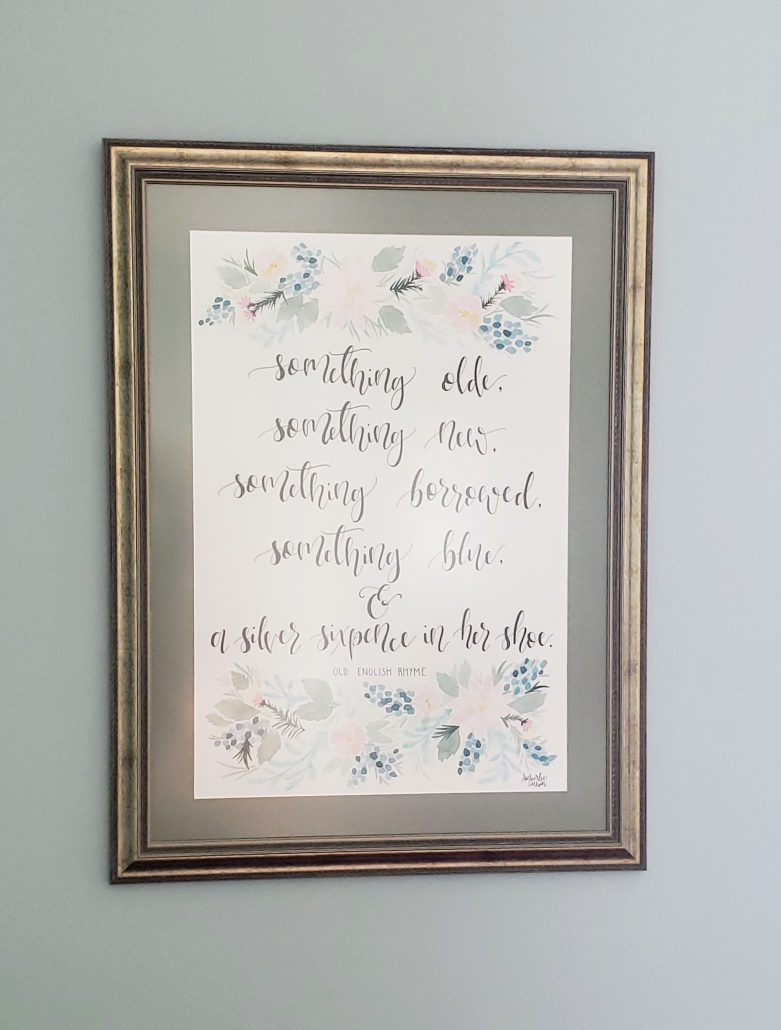 “Something Old, Something New”

This poem has been recited more times than any of us can tell.  The origin of it is somewhat vague, but the words themselves urge the bride to gather up items that are old, new, borrowed, and blue.  The “something old” represents continuity by allowing the bride to carry something from the past into the future, and it also offers protection for the babies that are to come.  The “something new” shows an optimistic outlook for the future and hope for all of the new adventures to come. “Something borrowed” is always borrowed for another happy bride who has had children to pass that same child bearing happiness onto the new bride.  “Something blue” doesn’t just stand for purity and fidelity, but it also helps ward off any evil that might make its way to the ceremony. The addition of the “sixpence in the left shoe” brings good fortune and prosperity to the new couple.  We recently commissioned a hand-lettered creation of this poem from local artisan Amberlee Carlson to hang in our bridal suite.

That last line is especially meaningful to us.  You might remember from our last wedding blog that we named our farm “Six Penny Farm” because there are six Pences in our family, and we named our event space “Six Penny Hall” to reflect those origins. We are excited to pass a little of this tradition on to our brides, as we give each one a sixpence (along with a print of the poem that hangs in our bridal suite) when they book with us!

Winston’s Words of Wisdom for Wyatt

Wine Legs – What Can They Teach You?
Scroll to top
Review Us!